This year, everyone is suffering from election and Covid exhaustion in the media.   Except for 20 minutes in morning of watching 4 major news networks, ( I give 5 minutes each,  to CNBC, Fox, MSNBC, and CNN,  gives me everything I need to know,  and from two very different points of view),  I go dark on the video media the rest of the day.

Next week, in addition to the General Election, the people of Illinois get to vote on whether a tax increase makes sense, and is in their family’s best interest.

Instead of the usual posts you see from investment advisory firms, comparin

Here are the historical rates, and how the increase in 2011 was supposed to work.

In January 2011, lawmakers pushed through a record income tax increase that raised the income-tax rate on individuals to 5 percent from 3 percent, and on corporations to 7 percent from 4.8 percent. They called it the Taxpayer Accountability and Budget Stabilization Act.  There were some big promises made at the time, but I am going to try to keep focused on the number, what happened with the taxes, and the results.

The plan was to increase the taxes for a few years, to pay a $8.5 billion unpaid bill backlog, and shore up public pension deficits.

So, what happened?   $31.6 billion of additional revenue was raised over a 5 years. 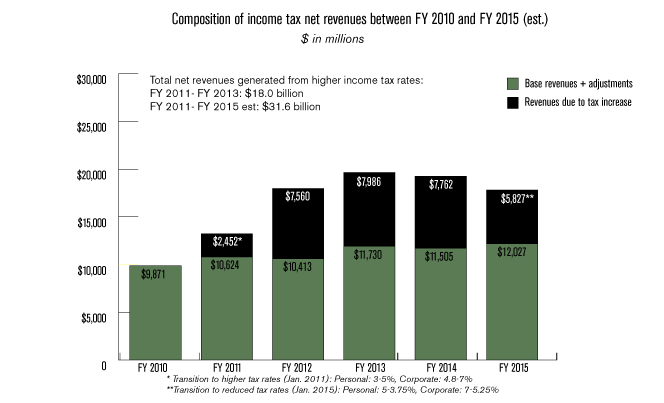 In 2015,   the bill backlog still stood at $ 7 billion.   Interest payments on these unpaid bills was 3.5 times higher than 2011,   the credit rating of Illinois was downgraded 5 times,  and the pension debt was still unsustainable.  In other words, the tax hike did not accomplish what it was supposed to do.

As scheduled, in 2015, individual income tax rates went back to 3.75%,  and 5.25% rates on corporations.   Citizens received a much needed reprieve.  But, since the additional funds were not used as they had been promised, Illinois found itself right back where it started, but with worsened fiscal problems.

The new Governor Bruce Rauner attempted to size current expenditures with the new reduced revenue,  but was unable to pass a budget for 2 years.

In 2017,  a compromise was reached, to end the budget crisis,   with Illinois Lawmakers passing another increase with 72 votes (71 was needed), raising the individual tax rate to 4.95%,  and corporate rate to  7%, , a 32% increase,  the largest permanent tax hike in Illinois history.

Since then,  Illinois continued to run a budget deficit, unpaid bills come to $6.6 billion (as of June 2019),  the pension system still is only 40% funded, with a shortfall of $137 billion.( as of February of 2020).    Illinois debt rating remains at one notch above junk ratings,  with Moodys and S&P dropping their credit outlook to negative, from stable,  in April of 2020.  .

As we all know, these numbers have worsened due to COVID 19,   and the resulting economic impact from the virus,  but information on where we are currently is hard to come by.

What’s the new proposal to fix these problems?

Illinois residents will have a chance to vote on a proposed amendment change to the Illinois Constitution.

To summarize,   the amendment deletes the constitution’s language prohibiting graduated income tax rates and guaranteeing just one rate for all individuals and one rate for all corporations. It substitutes the following language: “The General Assembly shall provide by law for the rate or rates of any tax on or measured by income imposed by the state.”

Changing the amendment, also eliminates a check against the State Assembly, which means Illinois lawmakers for the first time could raise taxes on certain segments of the population based on income – including retirees, with just a simple majority of the vote.

Here are the proposed new rates on individual, and family, taxable income.

S Corps and other pass-throughs are small businesses, with these businesses responsible for 60% of the net job creation in the state,  prior to COVID 19.   There are 280,000 small businesses employing 2.5 million people, as of April, 2019.  With the COVID 19 economic decline, a tax increase at this time will put further pressure on these businesses.

Where our tax dollars go, and the shortfall

On June 10th of this year, Gov. J.B. Pritzker signed Illinois’ 20th consecutive unbalanced budget . The spending plan is out of balance by roughly $6 billion, despite a constitutional requirement to balance the budget.

The bottom line,   the new Illinois Tax Proposal is expected to raise $3.7 billion in additional tax revenue in 2021, if passed.  That leaves a $2.3 billion budget gap.    The proposal also will allow additional income taxes to be passed on targeted groups, including retiree income, by a simple majority of the State Legislator.

My personal take is that I don’t think any of the 18 Billionaires in Illinois, for now, have an issue with chipping in some extra dollars to help fix the states fiscal problems.   And,  the rest of the 3% that the states ads claim would be the only families impacted by a slightly higher rate most likely do not have an issue paying a bit more.

The big problem is, that its not enough.   The revenue approach to fixing Illinois fiscal problems have not worked in the past.    An approach that could possibly work is addressing the large cost drivers, in a balanced fashion, and, I hate to say it, but, a slight, balanced increase in state taxes.

I hope everyone found this analysis helpful, and please give us a call with any questions on this post.

John Stanton is the Wealth Advisor at The Stanton Group WP | Seacrest Wealth Management, LLC. With more than three decades of experience in the financial services industry, he serves as an advisor for clients, focusing on financial planning and the investment strategies to support their financial plan. Based in Naperville, Illinois, John serves clients in Naperville, Aurora, Plainfield, Darien, and throughout the state. Learn more about John’s services by visiting www.stantongwp.com or connecting with him on LinkedIn. You may reach John Stanton at 630-445-2380 or email JStanton@seacrestwm.com.

Certain assumptions may have been made in the preparation of this material as at this date, and are subject to change without notice. This is not an investment recommendation or a solicitation to become an investor in a pooled fund and/or a separate account managed by the Firm.  This is not tax advice, and readers should consult their qualified tax professional on tax matters. Unless indicated, these views are the author's and may differ from those of the firm or others in the firm. We do not represent this is accurate or complete and we may not update this. Past performance is not indicative of future returns.